What is the Gas Mileage of an RV?

How Much is the Gas Mileage Driving an RV?

It’s a no-brainer that RV’s get horrendous gas mileage. Compared to a car its awful! With that being said, it is a house and not a car so the gas mileage acts a bit differently than a car as well.

One question I had before buying a used RV was what could I expect in relation to gas consumption? It’s a perfectly common question, after all – how can you estimate costs without knowing the MPG?

This is because RVs come in all types of sizes (length), engines, weight and driving style/terrain. All of these things play a huge role in the gas mileage. However using a rough estimate is a pretty good idea.

When I was in High School my parents had a 22 foot travel trailer and when we pulled it with our GM Yukon we got 10ish MPG on mostly flat roads in Michigan.

Gas Mileage you can Expect with an RV

I read about a couple who drove their 21 foot mercedes-benz diesel class-c around and averaged 16mpg, which is actually really damn good! However most people would more than likely be in the 10-12mpg range with a diesel. The problem is they cost about $20,000 more and you can buy a crap load of gas for that cash.

For Sonja and I we average about 7.2 mpg in our 30 foot sunseeker pulling a Jeep. So while it’s terrible it really isn’t as expensive as you’d think. Since 1,000 gallons of gasoline would cost about $2,500 and it would get us from New York City to Los Angeles and back again AND then about a third of the way there. That is a lot of driving!

So while the gas mileage isn’t good, overall its still relatively inexpensive to drive a motor home around – you don’t drive them like you drive your car, 10,000 miles would be a lot to drive one and that would cost us about $3,500. 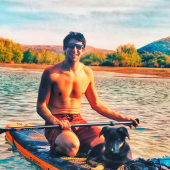 How to Tow a Vehicle Behind your Motor Home (RV)

What to Look for When Buying an RV (Used or New)

How Much Does RV Insurance Cost?

How to Tow a Lifted Jeep Wrangler Behind Your Motorhome